From April 26th to May 8th of 1993, Calvin's school held a contest for the students to design a traffic safety poster--whoever was chosen as the winner won a cash prize of $5. Calvin was excited for the contest and immediately got to work on designing, with Hobbes helping him--and Calvin (ultimately but very grudgingly) promising to give Hobbes 50% of the prize if he ended up winning.

After finally deciding on the slogan, Calvin and Hobbes got to work on the artwork for the poster, with Hobbes drawing a gruesome road accident and Calvin even putting chunky spaghetti sauce on the poster to create the illusion of gore. After he turned in his poster for the contest, Calvin was convinced that he was a shoo-in to win the cash prize.

Unfortunately for Calvin, he ended up losing--and to really add insult to injury (at least for Calvin), Susie Derkins was ultimately chosen as the winner (though the readers never get to see what she had done for her poster). Calvin was pretty upset about losing the contest (especially to Susie), convinced that the whole thing was rigged against him--Hobbes didn't think it was a big deal, arguing that he and Calvin at least tried their best. But Calvin, being who he is, complained that he feels there's no point in trying if you can't be a winner.

Calvin complained to his parents about what happened, even asking his dad to call the schoolboard and have Susie disqualified and have Calvin be declared the winner, though Calvin's dad refused to do so. He tells his son that losing is a part of life and that it's important to be good sport and keep things in perspective. This didn't do anything to placate Calvin, though.

Bill Watterson said this arc was inspired by a contest he entered when he went to elementary school. He worked hard on a careful drawing of Snoopy, which got him disqualified. He said he was crushed, but learned a valuable lesson about originality. "Calvin, of course, has the opposite problem". 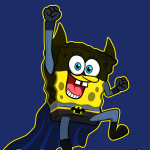