The Jurassic is the time period in which Calvin and Hobbes travel back in time in Calvin's Time Machine (one of his cardboard box inventions). They travel there twice in the whole series, first in "Yukon Ho!", and then in "Scientific Progress Goes 'Boink'".

Calvin's first encounter with the Jurassic

In Calvin's first encounter with the Jurassic, he traveled with Hobbes into the Jurassic period; around 150 million years ago. He and Hobbes' main intentions were to travel into the future in order to steal someone else's invention and become rich selling it in the present, but he accidentally traveled back in time due to the fact that the Time Machine was "facing the wrong way".

During their stay there, Calvin and Hobbes both thought they were in a sort of biosphere or arborotorium because the weather was hot and humid. They then found a dinosaur egg, thinking it was some sort of means of travel (keep in mind they thought they were in the future). After encountering a Stegosaur and almost getting "eaten" (it is likely that they were so shocked that their first thought was that it was carnivorous), they figured out that they were in the Mesozoic Era and rushed back to the Time Machine, escaping. Calvin then suggested they continue to the future, but Hobbes refused.

Calvin's second encounter with the Jurassic

Calvin and Hobbes second visit to the Jurassic was intentional this time. However, it was still the result of one of Calvin's many get-rich-quick schemes, as this time Calvin brought a camera and snacks (sandwiches) in a bid to take pictures of real dinosaurs and sell them to the public.

Calvin managed to take multiple shots of the area and fauna, but had to leave early, as he and Hobbes were chased down by a dinosaur and escaped just in time. This time the dinosaur was in fact carnivorous, to be specific, an Allosaur.

When Calvin returned to the present, he proceeded with his plan to get rich, but told his parents of his plan first. Unfortunately for him, his Dad told him no one would believe the pictures were real, saying "I didn't realize dinosaurs looked so small and plastic". 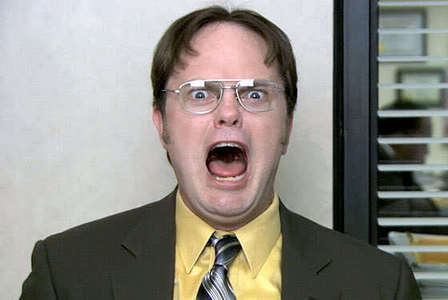