Susie is an adorable, smart, and polite 6-year-old girl. She takes her studies seriously and doesn't slack off on her homework as Calvin does. She also takes piano lessons. It has been said that the drawing of Susie Derkins is based on a drawing of Melissa Watterson as a little girl--hence her resemblance to Calvin's mother.

Her mother must be friends, or at least cordial, with Calvin's mother; this is supported when in a story arc Susie must stay at Calvin's house when her mother could not pick her up, and she called Calvin's mom when Calvin, as Stupendous Man, dropped a huge snowball on her. Oddly, although she treats school seriously, she sometimes attempts to cheat on tests. In the wintertime, Susie also likes to build snowmen, although they are nowhere near as unusual as Calvin's. The most unique creation of hers was a snow woman, which inspired Calvin to make an anatomically correct male snowman in the front yard.

As Calvin's only major human playmate, Susie factors into many of Calvin's fantasies. In 1991, after Calvin found that he couldn't "throw snowballs when Earth's gravity has increased" (Hobbes also remarked that the increasing gravity explained why Calvin spilled his breakfast down the heater), the situation warranted the intervention of Stupendous Man, who flew into the air and hit his archenemy, Annoying Girl, with a snowball the size of a bowling ball. Susie appeared in two more Stupendous Man stories, in 1992 and 1993, but only as Susie Derkins, innocent bystander. Apparently, Annoying Girl never recovered from being the only foe Stupendous Man vanquished. Sometimes, an antagonist appears only once -- for one battle. 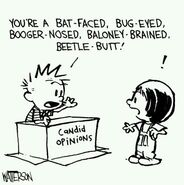 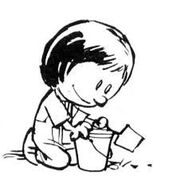 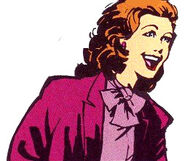 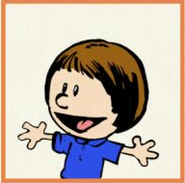 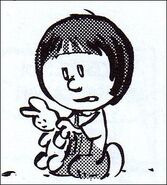 Add a photo to this gallery
Retrieved from "https://calvinandhobbes.fandom.com/wiki/Susie_Derkins?oldid=32961"
Community content is available under CC-BY-SA unless otherwise noted.