The Calvin and Hobbes Wiki
Register
Don't have an account?
Sign In
Advertisement
in: Classmates, Females, Main characters,
and 4 more

Susie is an adorable (subjective), intelligent, and polite 6-year-old girl, who in many ways is a foil to Calvin. She takes her studies seriously and doesn't slack off on her homework as Calvin does. She also takes piano lessons. It has been stated that the drawing of Susie Derkins is based on a drawing of Melissa Watterson as a little girl--hence her resemblance to Calvin's mother.

Her mother must be friends, or at least cordial, with Calvin's mother; this is supported when in a story arc Susie must stay at Calvin's house when her mother could not pick her up, and she called Calvin's mother when Calvin, as Stupendous Man, dropped a huge snowball on her. Oddly, although she treats school seriously, she sometimes attempts to cheat on tests. In the wintertime, Susie also likes to build snowmen, although they are nowhere near as unusual as Calvin's. The most unique creation of hers was a snow woman, which inspired Calvin to make an anatomically correct male snowman in the front yard.

While Susie often ignores Calvin entirely, she is attracted to Hobbes. She often hugs Hobbes or comments on how he is cute (to Hobbes' delight and Calvin's disgust). Although Hobbes does not return the love physically (as he is only a stuffed tiger to her), Susie often becomes the topic of conversation while talking with Calvin. He also wears ties and things for her, and Calvin yells at him for not mauling her when he has the chance. She has a stuffed animal of her own, a rabbit named Mr. Bun. It may be implied that this is Susie's version of Hobbes, though it has not been seen in any living form, and Hobbes once remarked that Mr. Bun seemed comatose, as he does not "come alive" as Hobbes does. Susie seems to love Hobbes, often asking to squeeze him, but then gets mad when Calvin will play pretend with his "dumb ol' tiger" but not with Mr. Bun.

Susie unwillingly sits by Calvin during lunchtime at school, but Calvin always decides to sit next to her anyway. In many situations, Calvin would talk about his lunch, portraying it as something disgusting and unappetizing. The first instance of this was when Calvin described his supposed "squid eyeball sandwich", stating that he likes to "suck out the retinas." Another example would be when he told Susie that he mashed some flies into a paste onto two pieces of bread, and called it "bug butter". Susie often tells on Calvin for being so disgusting by usually shouting out to Miss Wormwood.

The love/hate relationship expanded over the years. In one Valentine's Day strip, Susie angrily pelted Calvin with a snowball after receiving his Valentine's gift (a hate-mail and a bunch of dead flowers), but in the same strip walked away, thinking, "He likes me!" inwardly rejoicing at the gift, as Calvin thought the same. Another time, they were mercilessly insulting each other, before Calvin said to the reader, "It's shameless the way we flirt." Calvin once compared them to Tarzan and Jane when Susie points out his underwear while he is pretending to be Tarzan, stating that "I don't think Jane ever said that to Tarzan." In one strip Susie blackmails Calvin into saying that he missed the "melodic sound of her voice" when he calls her about homework, implying she is more ready to admit her feelings about Calvin than he is.

However, the two do notshow any love. Susie is instead the target of several of Calvin's practical jokes, while Susie just tries to be friends. She can often persuade Calvin to play "house" or play with her. Sometimes, though, Calvin's actions enrage Susie into going as far as beating him up. Watterson has stated that Susie is literally the kind of girl he was always attracted to (and did finally marry). Hobbes has feelings for her and so does Calvin. In fact, when Calvin cloned just his "Good Side," the Good Side made his feelings public. Susie thought it was all sarcastic. 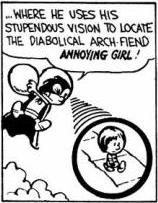 As Calvin's only major human playmate, Susie factors into many of Calvin's fantasies. In 1991, after Calvin found that he couldn't "throw snowballs when Earth's gravity has increased" (Hobbes also remarked that the increasing gravity tells why Calvin spilled his breakfast down the heater), the situation warranted the intervention of Stupendous Man, who flew into the air and hit his archenemy, Annoying Girl, with a snowball the size of a bowling ball. Susie appeared in two more Stupendous Man stories, in 1992 and 1993, but only as Susie Derkins, innocent bystander. Apparently, Annoying Girl does not recover from being the only foe Stupendous Man vanquished. Sometimes, an antagonist appears only once -- for one battle.

Susie also appears as a terrible booger being when Calvin uses his imagination to act as Spaceman Spiff. According to Calvin its a "Loathsome bat-webbed booger being...a repulsive leech-like creature that attaches to you and never lets you alone until your dead!!"

The booger being takes the shape of a green booger with four legs, three eyes and antennas.

Susie's favorite food, or at least favorite lunch item, is "a swiss cheese and ketchup sandwich," as stated in the Nov. 6, 1989 cartoon. She said, "It's my very favorite, too," as a reason for not hearing about Calvin's lunch.