The Calvin and Hobbes Wiki
Register
Don't have an account?
Sign In
Advertisement
in: Supporting characters, Minor characters in story arcs, Females,
and 2 more

View source
watch 01:36
We're Getting Mutants in the MCU - The Loop
Do you like this video?
Play Sound

Strawberry blonde
Rosalyn, sometimes called Roz, is a supporting character in Calvin and Hobbes. She is Calvin's babysitter and a senior in high school. Calvin thinks she is evil, although she is simply strict because of his rebellious behavior. The main reason why Calvin dislikes Rosalyn is that she always sends him to bed by 6:30, which Calvin thinks is way too early for curfew. In her final appearance, Calvin behaved, and she was nice, mostly because she agreed to play Calvinball with him and Hobbes.

Rosalyn is Calvin's babysitter, a smart and responsible teenager. She also appeared for a short amount of time as Calvin's swim instructor. She also has a boyfriend named Charlie. Calvin, on one occasion, picked up the phone on the same line while Charlie had called Rosalyn and proceeded to tell him to break up with her and said she was a "sadistic kid hater". Rosalyn's idea of effective babysitting is a 6:30 bedtime for Calvin, and she has little patience for his attempts to rebel against her. Calvin will often freak out whenever he hears that Rosalyn is going to be babysitting him, in one instance screaming in protest non-stop for an entire strip (prompting his Mom to say in the last panel, "For goodness' sake, Calvin! Take a breath before you pass out on the floor!")

A few times, Calvin seemed to have gotten the upper hand on Rosalyn by doing something rather provocative and insidious, which she found rotten and would often consider threatening him to stop what he was doing. Once, he stole her science notes when she was studying for a test at school the next day and planned to flush them down the toilet. But he didn't really do it. The next time, he tricked into stepping out of the house and locked her outside so he and Hobbes could have fun while she couldn't get back in, going so far as threatening to break a window if he didn't let her in. The next time she came, he dressed up as Stupendous Man to try to attack her without breaking the rules of giving her an easy time tonight, but she wasn't fooled one bit. After that, she forced him out of bed to write a full-fledged confession for the attack, which he still denied. Each of these left her enraged, but she always found a way to get Calvin to bed after all the trials and tribulations he put her through.

In the final Rosalyn story, however, their traditional war is averted by a game of Calvinball, in which Rosalyn proves to be a formidable player, and once again trumps Calvin with a clever move in the last panel. This display of extensive imagination showed her to be not entirely lost to the dull world of adulthood, and this trait allows her to sympathize with Calvin's needs and ultimately control him much better than his mother ever could, such as in the same storyline as above, in which she allows him to stay up half an hour past his bedtime, and plays Calvinball with him, two actions which Calvin's mom would be sure to avoid (ironically, on returning home, Calvin's parents refuse to believe that she was able to play a game with him, and assume she is making a joke). In the strips where Calvin had locked Rosalyn out of the house, his parents got mad at him and his mom pointed out that locking Rosalyn out of the house wasn't just mean, it was dangerous -- if something bad had happened to Calvin (like if he had gotten hurt or there had been a fire), Rosalyn wouldn't have been able to help him. Hearing this (and finally realizing the severity of what his actions), Calvin is forced to apologize to Rosalyn for what he did and admits to Hobbes later that night that he honestly does feel really bad for all the nasty stuff he did, with Hobbes adding that them eating all those cookies didn't help. 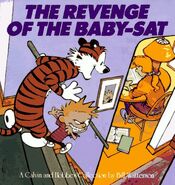 Thump! And Rosalyn goes out!
Community content is available under CC-BY-SA unless otherwise noted.
Advertisement