Calvin's mother is one of the tritagonists of Calvin and Hobbes and Calvin's mother. Mom is a stay-at-home parent who is frequently exasperated and troubled by Calvin's antics. It's been said that she used to work, but her job was incredibly stressful. Calvin's mother was used to it, so she was the one best-suited to stay home and deal with Calvin. (However, Calvin's father is the person who said this, and he may have been joking.) It has been said that Calvin's mom is actually a drawing of Melissa Watterson.

On the rare occasions when Mom is not reacting to her son's misbehavior, she seems to enjoy quiet activities, such as gardening and reading, although it is almost always disturbed or interrupted by Calvin. The "daily disciplinarian", Calvin's mother is frequently the one forced to curb Calvin's destructive tendencies; once, she allowed Calvin to smoke a cigarette in order to teach him how unpleasant smoking can be. Calvin's mother also usually seems sympathetic towards her son's relationship with Hobbes, and a few times has found herself speaking to Hobbes as well (although she refers to one instance as "talking to a stuffed animal"). She has a serious trouble getting Calvin organized when Rosalyn is about to come for babysitting. Calvin's mother also sometimes seems to have problems getting Calvin to go to school.

Calvin's mother is a relatively stressed, exasperated, sensitive, but also beautiful, down-to-earth mother and person whose attitudes serve primarily as a foil for Calvin's outlandish behavior. She's both the most reasonable of Calvin's parents and also the most temperamental, emotional, and reckless of the two.

She may have been a party animal in her college days, like her husband. In one strip Calvin looks through a college yearbook and pictures and asks his father who the “bimbo” in the picture is, to which he responds,“That ‘BIMBO’ is your mother!”. This also implies that the two were fellow students and/or juvenile crushes.

Calvin takes after his mother in his dislike of the outdoors, and the two despise their annual camping trip. In one strip, while driving to the lake to go camping Calvin points out a hotel and suggests the family stay there for a week, relaxing while a maid cleans up after them and buying fish from a store to pretend they went camping and fishing if anybody asks, and his mother quickly agrees and urges his father to pull over.

On one occasion, Mom tells Calvin that she hopes he has a kid that puts him through what he put her through, and he responds that "Grandma says she used to tell you the same thing.", indicating that she was much like Calvin growing up.

Although Calvin and his behavior drive Mom crazy, she still loves him dearly. When Calvin was lost on a trip to the zoo, Mom became sick with worry, and was thrilled when his dad brought him back. In one strip, Calvin's mom is shown chasing Calvin shortly before his bedtime, tickling him whenever she catches him; in the end, Calvin explains to his father, "Her plan backfired, Dad. I'm all wound-up, and Mom needs to be put to bed." She has also stepped in when Calvin has his father going too far with his own private jokes, going so far as to say "I know somebody who's going to get a lot of coal in his stocking, buster."

Mom frequently scolds her husband for his sarcasm in dealing with their son. She is sometimes able to calm Calvin down when he is in a bad mood, offering peanut butter crackers, comic books and other treats to cheer him up. At one point, Calvin became ill and his mother tended to him from the start, beginning in the early morning when Calvin throws up. Though she is almost always shown criticizing Calvin's behavior, it is revealed that she may have been problematic when she was a child as well.

Although Calvin's mother loves him very much, she has sometimes made references in some strips that she wanted a daughter instead of a son. Mom has even, in a fit of rage, blamed her husband for giving her the chromosome that caused her to have a boy. Calvin himself has even theorized that she thinks of this; after she turned down Calvin's offer of helping around the house with unnecessary carpentry, he stated: "Mom wanted a girl. I just know it."

Calvin's views of his mother have varied within his own mind. Sometimes she serves as an enemy alien for his Spaceman Spiff alter ego, implying antagonism. Interestingly, Calvin told his class that when he is at school his mother puts on a patriotic leotard, knee-high boots and a cape, and saves people and punishes wrongdoers like Wonder Woman, which implies Calvin holds his mom in high regard.

Calvin dislikes her cooking, to the extent that she must trick him into eating it, often by telling him that it is something revolting.

She has used Calvin's love for hamburgers as an advantage in one instance; after Calvin takes a single lick of food and flails about on the floor pretending to die, she put him back in his chair and explains to him, lightly frustrated, "Oh, knock it off, Calvin. It's hamburger casserole. There's not a thing in there you don't like." Calvin, awestruck that the meal is hamburger, takes a bite and explains in detail that it is not so bad and that he's suppressing the "gag reflex". His mother, understanding the underlying meaning, resignedly replies, "Good. I'm glad this is such a hit."

Moving green glops of food occur in some strips; after Mom served his oatmeal, Calvin then thrashes around the house chasing after the glop of oatmeal. After she gets ticked off at the mess, she shouts to Calvin's dad "It's your fault we didn't have a sweet little girl! Your stupid chromosome, not mine!" The final panel shows a confused Dad going back to reading his book. A thought bubble above him reads "I just live here".

According to Bill Watterson, Calvin's mother never received a name because she was only important to the storyline as Calvin's mom, however, he later said that caused problems for him as the lack of her backstory which prevented character development, as well as the fact that lacking a name made it hard for her to converse with other characters such as Calvin's uncle, Uncle Max. Watterson has said he regretted the fact that the strip mostly shows Calvin's mother's impatient side, but he also tries to show other aspects of her personality by what she is doing when Calvin invades. One strip where she was featured prominently was when the house was robbed, which was a point where Calvin and Hobbes played more background roles and the parents were put frontstage in trying to make sense of a serious story arc. Calvin's mother keeps a clean house, as she is occasionally found refinishing furniture or painting the walls. Calvin's mom also seems to have an active social life, writing letters and leaving phone messages for friends, even inviting friends over for tea on occasion. Needless to say, Calvin tends to interfere with all these things. One particular example is that before her, Calvin's father, and an unnamed friend played cards, Calvin punched six holes clean through an ace. Interestingly, that was not done intentionally by Calvin to be disruptive, rather he and Hobbes were imagining themselves as cowboys and Calvin was pretending to be a sharpshooter. Later, Calvin's dad clearly knew that Calvin had punctured the Ace of Spades, as he was playing poker with his wife and his friend (who had Calvin's "shot" card in his hand). Calvin's dad elected to fold whilst the friend remarked "Hey! What's with this deck?!" 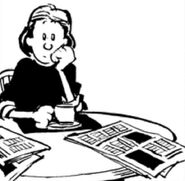 Add a photo to this gallery
Retrieved from "https://calvinandhobbes.fandom.com/wiki/Calvin%27s_mother?oldid=32987"
Community content is available under CC-BY-SA unless otherwise noted.