The second time Calvin used his Duplicator, he added the Ethicator, and thus created a duplicate of his good side. This duplicate was extremely well behaved, so much that Hobbes couldn't believe that people thought he was actually Calvin. This, however, backfired on Calvin when the duplicate started writing valentines to Susie Derkins. When Calvin found out, he immediatly began searching for the duplicate, trying valiantly to defend his reputation and principles as "dictator-for-life of the Get Rid Of Slimy girlS club". Eventually, Calvin confronted the duplicate, and they got into a fight. The duplicate, however, vaporized when he had an evil thought, thanks to a moral compromise spectral release phantasmatron Calvin unknowingly built into the Ethicator. 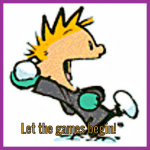